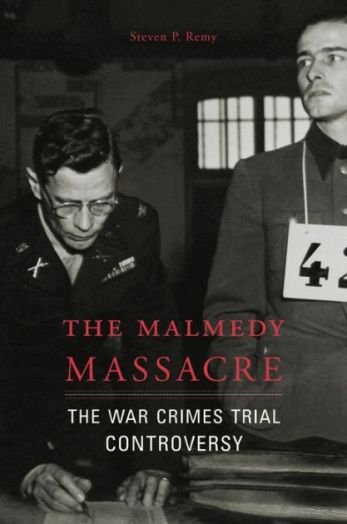 The thing about a book review is you have to actually read it and comment on the contents within. It appears that this so called review by Mr Wear is anything but. The review is nothing more than a list of lies and out of context anecdotes trawled from the usual places on the Internet. The review, however has attracted at least one comment from the brain dead of denier land who seems to consider Mr Remy’s excellent book as “bias” and Mr Remy himself as a “liar” and  “discredited as a serious author”.

So what angle does Mr Wear take on this book?

The Malmedy trial took place from May 16 to July 16, 1946, at Dachau before a military tribunal of senior American officers operating under rules established by the Nuremberg International Military Tribunal. American historian Steven P. Remy has written a book titled The Malmedy Massacre which disputes that the 73 German defendants in this trial were improperly convicted.

So far so good. Mr Wear has got something correct for a change. Except that Mr Remy doesn’t just dispute the claims that 73 German defendants were improperly convicted, he blows that myth right out of the historical water!

When Mr Remy writes in his book:

There is no evidence that in the North African, European, or Pacific theaters American interrogators relied on systematic forms of physical and psychological pressure to obtain information from combatants or civilians. Nor is there convincing evidence that they did so in war crimes investigations after the war.

…the key word here is SYSTEMATIC. That is the use physical and psychological pressure as allied legal policy of the sort used by the Nazi courts at use during the war. What individuals  may or not have got up to in the attempt to get evidence does not imply the whole system was corrupt.

So we start with Benjamin Ferencz. Firstly, he had nothing to do with the Malmedy trials carried out at Dachau. Secondly, Ferencz was just one member of the prosecution team, and was not repsonsible for the bulk of the confessions obtained at the Mauthausen trial.

Any Harvard law graduate knows that such evidence is not admissible in a legitimate court of law.

Indeed…and there is no evidence that the evidence procured by Ferencz was ever accepted at the trial. At the Mauthausen trial itself the defense team focused on the means in which testimonies were obtained and was the main method used to try to discredit prosecution evidence. Contrary to the belief of Mr Wear, the methods used to obtain evidence were discussed openly at the trial. All which accounts for this statement:

The defense counsel at the Mauthausen trial in Dachau insisted that signed confessions of the accused, used by the prosecution to great effect, had been extracted from the defendants through physical abuse, coercion, and deceit.

from Mr Wear. The only problem is that the Judges at the trial found that the accusations were unfounded. Mr Wear failed to mention that fact. I can’t see why he should…it is stated in the same source that Mr Wear uses, and on the same page. See

Mr Wear then quotes entirely out of context:

This has NOTHING to do with the Malthausen trial. Nothing at all. Ferencz was talking about questioning villagers about the shootings of allied fliers.

In the case of Friedrich Gaus, for example, Kempner had threatened to turn Gaus over to the Soviets unless he was willing to cooperate with the prosecution

An accusation that was openly discussed in Court!! Indeed most of the accusations made against the prosecution teams and used by the defense WERE OPENLY DISCUSSED IN THE COURTROOM. It is interesting that neither Mr Wear, not the writers at IHR give the response by the Judges at the trials. It makes you wonder why…..

Well, it was only a matter of time before the Rudolf Hoess accusations would raise their ugly heads. This is a denier meme that has been doing the rounds for well over a decade and is so distorted by deniers to try to prove that ALL DEFENDANTS at the Nuremberg trials were tortured. It is a meme however that is worth taking a look at.

Allied prosecutors often used torture to help convict the defendants at Nuremberg and other postwar trials.

Wrong. Completely and utterly wrong. Nobody at the main Nuremberg trial was tortured whilst in custody there. None of their statements were ever obtained through physical or psychological torture. NONE.

A leading example of the use of torture to obtain evidence is the confession of Rudolf Höss, the former commandant at Auschwitz.

Not at Nuremberg it wasn’t. The statement made at Nuremberg by Rudolf Hoess was not made under duress or as the result of torture. Mr Wear is a lying.

Höss’s testimony at the Nuremberg trial was the most important evidence presented of a German extermination program.

No it wasn’t. Mr Wear is simply creating a straw man argument. There were many sources used at the trial to prove genocidal intent and not just the evidence of Hoess.

Höss said that more than 2.5 million people were exterminated in the Auschwitz gas chambers, and that another 500,000 inmates had died there of other causes.

…a number which he admitted later was too high and was the results of what Eichmann had told him. In other words, Hoess revised the number…lower.

No defender of the Holocaust story today accepts these inflated figures

…and neither did Hoess.

In 1983 the anti-Nazi book Legions of Death by Rupert Butler stated that Jewish Sgt. Bernard Clarke and other British officers tortured Rudolf Höss into making his confession.

This is where Mr Wear deliberately misleads the reader. Hoess was originally found by the British in a farm house living under a false name. He had been discovered after his wife had been tricked into giving the British his location. On arrival at the farm, the British squad questioned Hoess as to his real identity. Hoess initially refused to say who he really was so he was struck until he admitted his real name. When his identity was obtained, the soldiers who were mainly Jewish beat him up. They at no time tried to make him confess to anything. They beat him up because of who he was and what he was responsible for. The beating was stopped and Hoess was taken for interrogation. He was kept awake for three days until he wrote a confession.

At this point it must be stressed that the confession he signed WAS NOT THE ONE USED AT NUREMBERG. After having signed his confession, Hoess was taken to Nuremberg where he was treated well by his mainly US guards. It was here that Hoess wrote out another statement, the statement used at the trials. Interestingly enough, the statement was similar to the one given to the British. After the Nuremberg trial, Hoes made a further written testament after his trial in Poland. That testament formed an autobiography: “The Commandant at Auschwitz”.

Nope. The testimony obtained by the British was not the one used at Nuremberg.

Had nothing to do with Nuremberg or any of the trials associated with it. He worked for the Polish police after the war.

Joseph Kirschbaum was also accused of physical abuse at the Malmedy trial when German prisoner Otto Eichler accused Kirschbaum of beating him. A review of the medical records indicated that Eichler had received an injury, but it could not be proven that Kirschbaum had caused the injury.

Here is what the investigator into allegations had to say about the claims made by Eichler:

Clearly Eichler had received an injury (finger marks and a small blood clot on the chin), but Foster had already determined that many similar accusations were being concocted and circulated within the camp, leading him to conclude that “the evidence concerning [Eicler’s] purported mistreatment is equally compatible with a planned attempt to discredit Kirschbaum as it is with the contention that Kirschbaum abused Eichler.

Moreover, even Everett, the main defense lawyer in the Malmedy trial after having tried to discredit Kirschbaum thought he was so good that he recommended after the trial for future employment as an investigator.

Stephen F. Pinter served as a U.S. Army prosecuting attorney at the American trials of Germans at Dachau

Indeed he did, but Mr Wear would be hard pressed to prove that Pinter stated that “Unfortunately, as a result of these miscarriages of justice, many innocent persons were convicted and some were executed.” The source has a German origin, and we all know that Mr Wear does not speak German.

There is no evidence this event ever happened. According to the Dachau trials documents there was no such defendant with the name of Menzel. It’s a made up story. See here for more detail.

The use of false witnesses has been acknowledged by Johann Neuhäusler, who was an ecclesiastical resistance fighter interned in two German concentration camps from 1941 to 1945.

Neuhausler was part of a German group that worked to get the trial results quashed. His accusations were investigated fully. Major Joseph Heafele had this to say about the subject:

As for Neuhausler’s charge that the prosecution witnesses had given false testimony, Haefele noted that “The cry of perjury has long been a favorite with the accused in War Crimes cases, particularly in petitions submitted subsequent to trial” and that none of the accused had been convicted solely on the testimony of the alleged perjurers identified by the archbishop.

If Mr Wear had actually READ Remy’s book fully he would have been aware of these facts. yet he fails to mention any of them. That is dishonest when providing a book review. It is yety another example of cherry picking.

There is nothing Mr Wear enjoys more than repeating the same old stuff. For my take on Willis N. Everett, see my post here:

Remy provides no documentation for his contention that Everett challenged the outcome of the Malmedy trial “as an opportunity for personal and professional redemption” and “the possibility of considerable financial gain.” Everett had more to gain financially and professionally by forgetting the Malmedy trial and working full time in his law firm. Remy is attempting to discredit Everett’s motives for challenging the Malmedy verdict by his unsubstantiated statements.

…and we all know how Mr Wear misuses documentation. Remy’s analysis of Everett goes far beyond one paragraph cherry picked from the book.

However, the Malmedy trial was not a fair and impartial hearing. The lack of documentary evidence, the use of mock trials and interrogation methods designed to produce false confessions, military judges with little or no legal training, and unreliable eyewitness testimony in the Malmedy trial assured the conviction of all 73 German defendants.

An incredible use of cherry picking here. The Mamedy was indeed a fair and impartial hearing. It was investigated by at least 4 investigation committees. All arrived at the same conclusions. Where methods were seen as improper, those testimonies were discussed in court and struck from the record. It is quite obvious why there was a lack of documentary evidence for the Malmedy massacre. The only type of evidence suitable here is eyewitness testimony. Yes…the proceedings were not flawless, yes, the original judges were inexperienced in terms of the law, but as Remy states:

Yet the trial was not the totalitarian monstrosity portrayed by the amnesty lobby and then by historians. Everett and the other defense lawyers had done an admirable job of defending their clients.

The 73 German SS members were all found guilty. None were executed. All were released by 1956. It appears that the losers CAN write their own history….