Mr Wear does not seem to be able to let go of the faulty notion that the Nazis somehow foiled a Soviet invasion in 1941. He seems to enjoy flogging the proverbial dead horse. Now, by using the thoroughly debunked claims of Viktor Suvorov, he claims that the “mighty” Soviet air force of 1941 was about to be unleashed on the pitifully weak German Luftwaffe.

So we now have the first of Mr Wear’s “would/could/should have” methods of historical revisionism. How on earth producing large quantities of TB-7 bombers could have averted WW2 is beyond me. Is he implying Adolf Hitler would have been prevented from attacking because of the so called threat of Soviet bombers over German cities?

Stalin needed only to produce 1,000 TB-7 bombers and announce to selected countries that the Soviet Union would use these untouchable TB-7 bombers to destroy any country that attacked it.

Pure supposition and wishful thinking. The imaginary Soviet bomber force would not have been the same as a nuclear deterrent.

Soviet aviation was designed to open the road to Soviet armies and support their rapid advancement.

Of course, as the western allies showed, a large bomber force could be, and indeed was used offensively.

If Stalin was preparing for a defensive war

He wasn’t preparing for any war to take place…in 1941. Only the Germans were.

If Stalin was preparing for a defensive war, he should have ordered his plane designers to create the best fighters in the world, capable of defending the skies over the Soviet Union. But fighters did not interest Stalin. Stalin ordered his fighter designer to drop all his work on the creation of a fighter and start developing a light bomber, named the Ivanov originally, and later the Su-2 in honor of its creator, P. O. Sukhoi.

Perhaps Mr Wear would like to see some actual figures for Soviet air craft available on 22 June 1941.

The SU-2 however was so poor that it was dropped from production in 1942.

All lacking, by all accounts on the SU-2.

Production of 100,000 to 150,000 Su-2 planes had been planned for conditions in which the Red Army would deliver the first attack, and nobody would hinder production of the plane.

Unfortunately for Mr Wear’s theories, only a handful were around when the Germans attacked. Weird don’t you think for a nation supposedly on the point of invading the whole of western Europe! As stated previously, production of the plane was halted in 1942.

When Germany invaded the Soviet Union it could only send 2,510 airplanes, including many outdated planes and assorted aircraft used for transport, communications, and medical purposes.

So here we have Mr Wear’s attempt to downplay the strength of the battle hardened German Luftwaffe. The Luftwaffe had destroyed virtually every air force up to 1941. The only exception was the R.A.F. Its pilots were highly experienced and trained as opposed to Soviet pilots with no experience and poor training.

…and Mr Wear paints the Soviet air force as some fantastically equipped super force. It wasn’t. The early model Soviet aircraft were no match for the excellent ME109 fighter. Quantity, in this case, did not match quality. Only later Soviet models were able to match the fighters of the Luftwaffe. It is no coincidence that the big German fighter aces could count the numbers of aircraft they had shot down in the hundreds. Most of these aircraft had been shot down in the target rich environment of the eastern front.

The Soviet air force exceeded that of Germany both in plane quantity and plane quality at the start of the war.

Total poppy cock. Mr Wear has about as much knowledge of Soviet and German military aircraft as does Viktor Suvorov. In other words…nothing.

the majority of Soviet pilots, including fighter pilots, were not taught dogfighting.

Soviet aviation was designed to conduct one grandiose, sudden, aggressive operation to crush the enemy’s air force on the ground in one raid and obtain air superiority.

So similar to German doctrine then.

Which planned aggressive operations set for June 1941? With what forces of “unheard-of dimensions”? Mr Wear is making it all up.

Again…what plans regarding an attack in the summer of 1941?

Airborne assault troops can only be used in the course of offensive operations and only in conjunction with regular troops advancing against the enemy.

Not true. The Germans used airborne troops many times in a defensive role. The U.S. used airborne troops in the defense of Bastogne in 1944/45. Of course, their main use is in the role of assault troops, but it is usually a good idea if they have the mass of aircraft around needed to transport them.

The actual number of trained parachutists in the Soviet Union at the beginning of the war was arguably closer to two million.

The Red Army needed an air armada of transport planes and gliders to deliver hundreds of thousands of paratroopers.

Gliders had light and fragile bodies and wings and could not be parked outdoors. Keeping a huge cargo glider outdoors during fall winds and rains would harm it beyond repair. Since all available hangars were already full with previously produced gliders, the mass production of gliders in the spring of 1941 meant that they had to be used either in the summer of 1941 or early fall at the latest.

Right…so the Soviets were incapable of building simple structures to put newly built gliders in?

Not prior to 1941 they didn’t. The mainstay of the Soviet parachutists was the old TB-3 seen here: 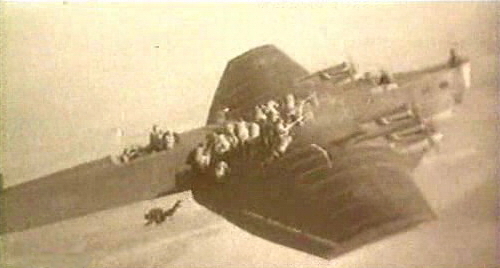 None of these aircraft were used in a military role. They were all used as part of the domestic transportation network. They were not put into any military use until AFTER the German invasion.

Suvorov discusses what happened to the Soviet airborne forces that could no longer be used in an offensive war. Ten air assault corps, approximately 100,000 to 150,000 men, had been originally sent to the trenches to help stop the German troops. The rest of the over one million paratroopers were kept in reserve and used as needed as regular infantry soldiers. These reserves were used to help stop German advances in the direction of the Caucasus, at Stalingrad, in the violent battle at Kursk, and in other crisis situations during the war.

Airborne assault troops can only be used in the course of offensive operations and only in conjunction with regular troops advancing against the enemy.

I wish he would make up his mind….

2 thoughts on “Stalin Wanted To Mount A Massive Air Offensive Followed By An Assault Of Nearly 2 Million Airborne Troops: Or The Over Use of Hyperbole.”