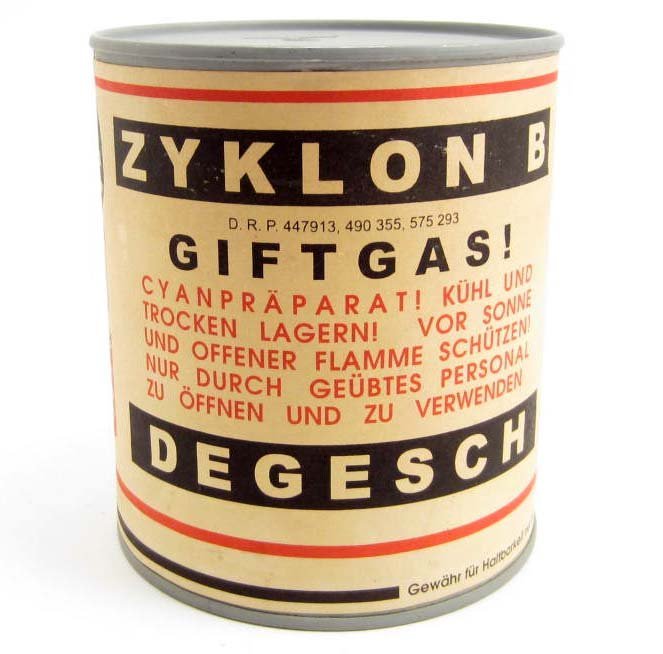 Mr Wear has an article posted on Inconvenient Histories that he has not yet placed on his blog. I thought it might be fun to preempt his article.

The Chemistry of Auschwitz/Birkenau

Where would deniers be without an article on the gas chambers of Birkenau and Auschwitz? Let us take a look at the distortions and claims in Mr Wear’s article. Firstly, like me, Mr Wear has no actual qualification in chemistry. This must be taken into account in relation to some of the claims Mr Wear makes.

In 1988, the Canadian government put Ernst Zündel on trial a second time for the criminal offense of knowingly disseminating false news about “the Holocaust.” As part of his defense in this trial, Zündel commissioned the U.S. gas-chamber expert Fred Leuchter to make a scientific examination of the alleged homicidal gas chambers at Auschwitz, Birkenau and Majdanek.

Fred Leuchter was no gas chamber expert. He has never actually built a gas chamber in his life. Neither is he a qualified engineer. As such, his so called expert report was actually thrown out of the Canadian Court during the Zundel Trial.

The resulting Leuchter Report is the first scientific study of the alleged German homicidal gas chambers.

Actually it wasn’t. The Poles investigated the Birkenau gas chamber ruins in 1945, including tests for HCN. Those tests proved positive.

In addition to reporting that the alleged homicidal gas chambers at Auschwitz, Birkenau and Majdanek were structurally unsuitable for gassing

…a theory promoted by looking at a pile of ruins at Auschwitz. Seriously? Surely he looked at blue prints? Well, no, it appears not.

Leuchter researched the chemical properties of the Zyklon B fumigant.

Leuchter was not a qualified chemist.

Leuchter found that Zyklon B is a highly toxic compound that releases deadly hydrogen-cyanide gas.

Well I never! Who would have thought?

The problem is, this is not something that happens after every use of Zyklon B otherwise whole buildings in Germany and ships out at sea would be covered in the stuff. Zyklon B was a common fumigant in the 1930s. Prussian Blue was not a common side effect of a delousing otherwise the Germans would never have used it.

Since building materials normally contain a certain amount of rust (iron oxide, usually between one and four percent), repeated exposure to hydrogen-cyanide gas would result in Prussian Blue staining on the walls of the alleged gas chambers.

Not a proven fact. The formation of Prussian Blue (PB) is extremely unpredictable. There is no evidence to show that PB would be formed every time Zyklon B was used.

Leuchter took forensic samples from the alleged gas chambers at the visited sites and a control sample from the delousing facility at Birkenau.

Why? Surely a control sample would be best coming from a place only used once with Zyklon B in a normal fumigation. If the gas chambers were only fumigated once or twice as deniers claim, then there is no point comparing them to delousing chambers where Zyklon B was used in vast amounts.

But they DID find traces of Hydrogen Cyanide in the ruins; a remarkable event since the ruins had been open to the elements for over 40 years. No PB..significant or otherwise was found in the buildings known to have been gas chambers at Auschwitz.

but the sample from a wall of the Birkenau delousing facility had heavy concentrations of the ferrocyanide compounds.

Conditions in the delousing buildings were different to the homicidal gas chambers.

Leuchter concluded that this result would be impossible if the alleged homicidal gas chambers had been repeatedly exposed to hydrogen-cyanide gas.

As he was no chemist, his conclusions were meaningless.

Except that Rudolf never took a brick out of the room to prove this fact. To this day, there is no real evidence that there is a direct link between the PB found on the inside walls and that found on the outside.

Rudolf also took samples from the alleged homicidal gas chambers and the delousing facilities at Auschwitz and Birkenau.

Indeed…without permission to do so.

Similar to Leuchter’s samples, the alleged homicidal gas chambers exhibit only insignificant traces of ferrocyanide residue on the same order of magnitude as found in any other building.

The traces are very significant in that they prove the ruins came into frequent contact with HCN. Rudolf only tested two other buildings at Auschwitz that were not delousing chambers or gas chambers. He tested the barracks that were in the same compound as the delousing chambers. Cross contamination was quite possible as this is also the area where clothing was stored after being deloused with Zyklon B.

A conclusion that can be only arrived at if Rudolf can prove that conditions and usage in both the delousing chambers and the homicidal gas chambers were identical. They were not.

Now we come to the first deliberate misuse of a historical source.

The team from this forensic institute led by Dr. Jan Markiewicz claims not to have understood how it was possible for Prussian Blue to have formed in walls as a result of their being exposed to hydrogen-cyanide gas.

This is an interesting claim to  make of a qualified chemist. Here is what Dr. Jan Markiewicz actually wrote:

“The undertaking of chemical analysis had to be preceded by careful consideration. The revisionists focused their attention almost exclusively on Prussian blue, which is of intense dark-blue colour and characterized by exceptional fastness. This dye occurs, especially in the form of stains, on the outer bricks of the walls of the former bathdelousing house in the area of the Birkenau camp. It is hard to imagine the chemical reactions and physicochemical processes that could have led to the formation of Prussian blue in that place.“

As we can see, Markiewicz is not claiming to know nothing about how PB is formed. He is stating that he does not know how PB formed on the outer walls. See the bold in my quote. Rudolf and Mr Wear have distorted the conclusions of the Krakow Institute.

The researchers therefore excluded Prussian Blue and similar iron-cyanide compounds from their analyses, resulting in much lower cyanide traces for the delousing chambers.

Of course they did, because there was no evidence to prove that PB would have appeared in the homicidal gas chambers.  There was no point, therefore, in testing for PB.

Actually he quoted several sources. Many pseudonyms of himself.

Kollerstrom is a liar and distorter of historical evidence.

Dr. Arthur Robert Butz writes in regard to the Kraków Institute of Forensic Research report

Dr Butz was not a chemist. His opinion is moot.

Dr. Richard Green, who has a Ph.D. in chemistry from Stanford University, agrees with Germar Rudolf that the Prussian Blue found in the delousing chambers is the result of gassings with hydrogen cyanide.

However, Dr. Green offers a possible alternative explanation for why the outside walls of the delousing chambers have blue staining.

Yep…because the notion of Hydrogen Cyanide managing to penetrate a brick wall is not actually proven. The PB on the outside bricks had to have got there via alternative means.

* Recent investigations now show now how PB could have formed in the outside brick walls of the delousing chambers.

“There is an as-yet unsolved mystery of how Prussian Blue made its way through apparently solid brick walls leaving its tell-tale blue stains on the exterior of both bath and delousing chambers in BIa and BIb in Birkenau. An answer might be found by looking carefully at Illus. 9.

This close-up picture shows strong Prussian Blue staining on both mortar and brickwork. Two other facts are revealed: (1) The stain scarcely penetrates the mortar. The broken section reveals pristine, unstained material proving that Prussian Blue does not penetrate solids to any great degree; and (2) the stains on the bricks appear like a semi-transparent wash, suggesting that the bricks are not subject (as was shown in the illustrations above) to any great penetration by the pigment.
A third, much more subjective, observation regards the patterns that the stain has left on the brickwork and mortar. The stain gives the appearance of having come through cracks in the mortar as a liquid and flowed down the surface of some bricks and part of the mortar. The stain is indeed stronger at the points where the mortar meets the bricks. If Prussian Blue is insoluble and practically inmiscible in water, whatever came through those walls must have had cyanide in some soluble form together with iron salts sufficient to react in order to form Prussian Blue. Furthermore, it could not be hydrogen cyanide in gaseous form as this would have dissipated immediately upon being released to the atmosphere.

Dr. Green’s speculation is absurd. Why would the Germans lean materials that had been soaked with aqueous solutions of HCN against the outside walls of the delousing chambers?

Dr. Green is not able to provide any convincing evidence why Prussian Blue would not form efficiently in the homicidal gas chambers.

Seriously? Mr Wear should take a look here then:

Rudolf has documented with expert literature on the chemistry of building materials that the cement mortars and concretes used in the alleged homicidal gas chambers are noticeably alkaline for many weeks, months, or even years. These walls would have been very much inclined to accumulate cyanide salts and to form Prussian Blue, even more so than the lime plaster of the disinfestation chambers

…and yet, Rudolf had every chance to have his report shown to the world at the Appeal Trial for David Irving. David Irving withdrew the report half way through the trial. Nobody knows why. Perhaps it was because Rudolf would have been unmasked as a charlatan; a man who made up names and qualifications as his sources. All pseudonyms for himself.

This bit amuses me. Some of the conclusions are weird to say the least.

they did not have escape-proof doors and windows

That’s because nobody was expected to escape!

they did not have panic-proof fixtures

They were empty rooms! Any damage would have been easy to repair.

they did not have technically gastight doors and shutters

Yes they did. They had felt seals.

Throw Zyklon B through side window or drop through holes in ceiling. No problem.

They had no effective device to ventilate or otherwise render ineffective the poison gas after the execution.

Yes they did. Kremas 1, 2 and 3 had forced draft ventilation systems. Kremas 4 and 5 simply opened the doors and shutters.

The roof of the semi-underground Morgue #1 of Crematorium II at Birkenau, which is said to have been the building’s homicidal gas chamber, remains intact to some degree today.

Contrary to eyewitness testimony, that roof has no Zyklon-B-introduction holes. This has been acknowledged by pro-Holocaust researcher Robert Jan van Pelt.

Has it? Perhaps Mr Wear should read “The Case for Auschwitz” p 500.

As documented in this article, chemists adhering to the orthodox Holocaust narrative have failed to explain why the walls of the delousing facilities at Auschwitz/ Birkenau are permeated with Prussian Blue while nothing of this sort can be observed in any of the alleged homicidal gas chambers.

Wrong. Chemists have stated exactly why the formation of Prussian Blue is a non issue.

One thought on “Preemptive Strike”