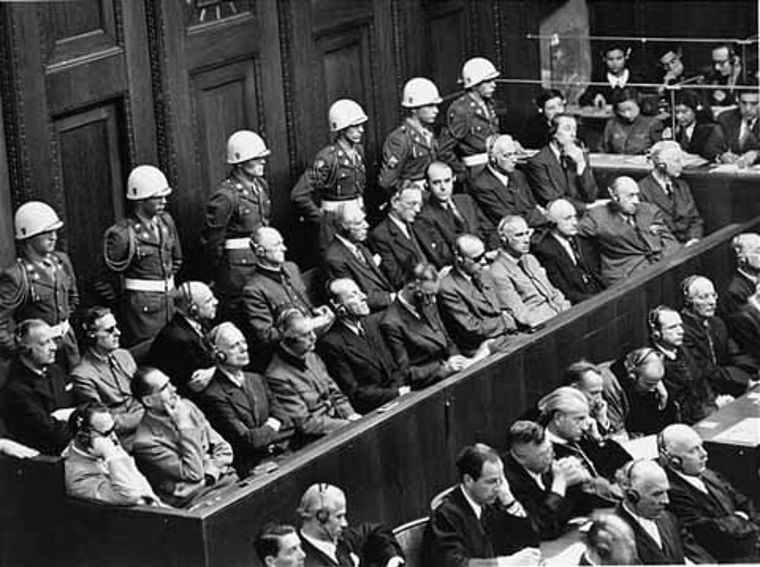 In his latest attempt to discredit the Nuremberg Trials, Mr Wear and his merry team turn to Holocaust Denier supremo, Robert Faurisson.

In my rebuttal of this article, I will draw extensively on the excellent work carried out by the team at Holocaust Controversies, namely Roberto Muehlenkamp. The following links will be where I get my information from:

Some misconceptions related to the Nuremberg trials …

“At Nuremberg the victors tried the vanquished; they were thus both judge and party to the case; they had decided beforehand that, if necessary, one would do without real evidence”

Faurisson/Wear (and other deniers like Graf) refer here  to Articles 19 and 21. As Mr Muelenkamp tells us:

“Articles 19 and 21 of the Charter of the IMT were no sinister or particularly “Nurembergian” provisions, but actually similar to provisions that are commonly applied in Anglo-Saxon and/or Continental European legal practice.

The International Military Tribunal did not consider the crimes for which the defendants were standing trial to be “facts of common knowledge”, […] but reached its findings of fact about these crimes like any tribunal or jury at any common criminal trial, by assessment of evidence presented before the tribunal”

“… the reason for the absence of technical rules of evidence at the Nuremberg Trial of German Major War Criminals was clearly not anyone’s intention to screw the defendants, as their “Revisionist” apologists would like to believe. The American jurists wanted to apply technical rules of evidence such as were applied in the US, but this approach was disliked by the jurists from Continental Europe involved in the making of the Charter, presumably for the simple reason that they and/or the Continental European judges nominated as members of the International Military Tribunal didn’t know a thing about US-type rules of evidence and accordingly would have been unable to handle them at the trial. The Americans decided to compromise, as said rules «were involved in response to the peculiarities of trial by jury» and they thus saw no reason to urge the use of these rules «in an international trial before professional judges». This compromise, as Mr. Kaschner pointed out, arguably benefited the defense insofar as none of the German lawyers acting as defense attorneys was familiar with technical rules of evidence as applied in the US.”

Mr Muelenkamp continues to tell us there were numerous accusations made against Germans which the Tribunal did not consider as proven beyond a reasonable doubt. The Katyn case being a good example.

“Moreover, the victors’ justice violated the usages of normal justice in ignoring the separation of powers (some of those who took part in the drafting of the Charter went on to become judges and prosecutors), instituting collective responsibility (any member of a group declared “criminal” was automatically considered a criminal himself), implementing retroactivity of laws and denying those convicted any possibility of appeal. No representatives of the neutral nations were among the judges and prosecutors.”

Here is what was concluded in The Final Report at the end of the trials:

“Despite the absence of any international statutes, it cannot be seriously urged that the defendants at Nuremberg did not know that the acts charged against them were wrongful, or that there was any element sf surprise or other unfairness in bringing them to book. As for the problem of the “victors and the vanquished,” experience with the Leipzig trials after the first World War offered a compelling rejoinder to those few who urged that war criminals should be remitted to trial and punishment by their own governments. More frequently, perhaps, it has been suggested that the tribunals should have been composed of representatives of the neutral nations; but these proposals were generally, and it is believed, rightly disregarded as unrealistic, if only because the number of truly “neutral” countries was so small that this solution would have proved entirely unfeasible. Indeed, in retrospect it appears to the writer that the highest possible degree of “fairness” was achieved by virtue of the very circumstance that the judges were acutely aware of their position as citizens of a victorious power.”

So to the next point:

“Resorting to an additional specification of Article 19 of the Charter, the Soviet prosecutor got the judges to refuse any serious investigation of the crime in Katyn Forest imputed to the Germans.”

And yet the Tribunal found the Germans not responsible of crimes at Katyn.

The aim of the Allied air force was to bring about a German surrender. The means was to bomb urban centers. There is a difference. The bombing of the civilian population was a means and not the aim.

“if one recalls the deportations (called displacements) of the German minorities from Central and Eastern Europe,”

The aim was to stop the sorts of problems that had occurred after the First World War as a result of the Versailles Treaty. The way it was actually carried out was appalling and caused a lot of suffering as a result of revenge by people who had suffered for years under Nazi oppression. Should the expulsions have been treated as a crime? Possibly so. However in the context of the time it was understandable and that western Allies would have had serious problems bringing those responsible to task.

A crime committed at a local level by Soviet troops in the main. It would have been incredibly difficult to have got those accused to trial. As far as I know, there was no direct order from any Allied High Command to rape German women.

“if one bears in mind the looting, the official grabbing by the Allies of Germany’s silver, gold, platinum, jewelry, securities, properties, banks, museums, scientific and industrial patents”

Germany lost the war, Mr Wear. Get over it. Unfortunately looting at a local level is an unavoidable consequence of war. Temptation is difficult to resist by any soldier, regardless the nation. Neither can you blame the Allies for getting their hands on German research and technology.

“to cap it all, one notes that the Nuremberg trials of German leaders earned the description, by some, of “a farce” or, in the words of Harlan Fiske Stone, Chief Justice of the United States Supreme Court, a “high-grade lynching party,”

…but not, in the main by those who were the losers in the war: the Germans. Most Germans found the trials to be fair in terms of procedure. As the trial and other subsequent trials continued, Germans however became more cynical as the trials became long winded and drawn out. It was at this stage that complaints of “Victor’s justice” became more noticeable.