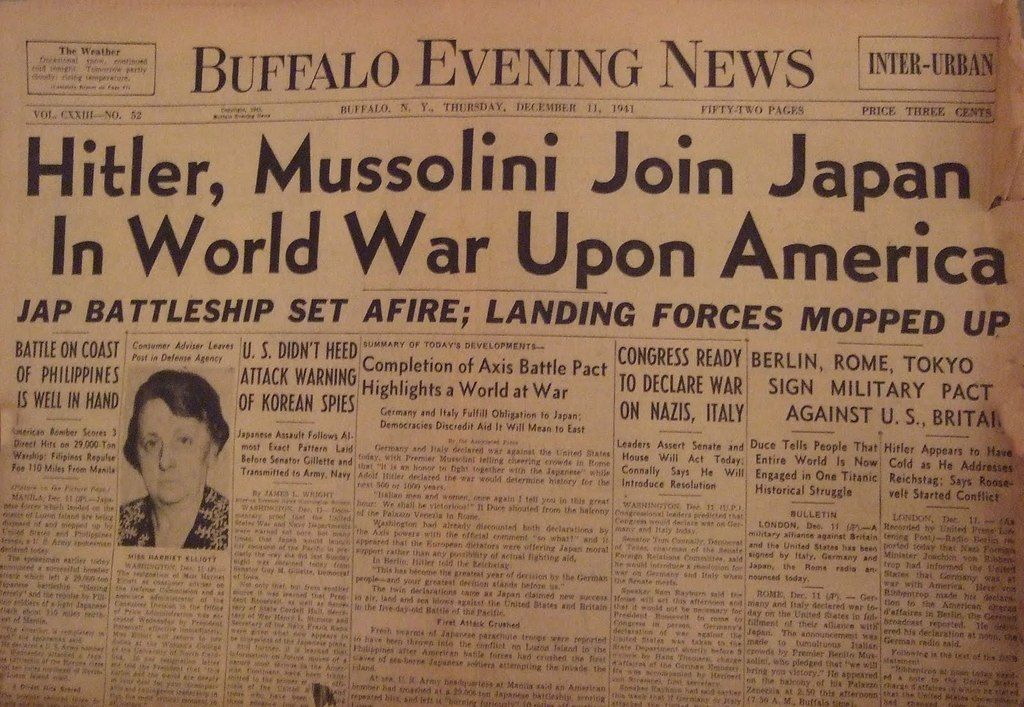 In his latest article, Mr Wear would have us believe that Roosevelt was itching to get to war with Germany. This was a theme promoted in 1940 by Isolationist groups who used, amongst other things, copies of “The German White Papers” which purported to provide documentary evidence of Roosevelt promoting a European war. These isolationist groups including the likes of New York publishers Howell and Soskin were paid to promote this line of attack by German funds coming from the German Embassy.

Prior to 1939, Roosevelt was more for appeasement. He did not want war, and the American public did not want to become involved in a war either. Neither was the US militarily ready for war. The US forces were underfunded and small. Most Americans did not want to become directly involved in Europe but that did not mean to say that the public did not support Britain and France in their stance against the National Socialist state of Germany…especially after 1 September 1939. After the German invasion of Poland isolationism started to crack. By 1940, the US was selling arms and resources to Britain. The election victory of 1940 allowed him to push for rearmament in what were hostile times. Congress was well aware that the US had to rearm quickly. Roosevelt realised that the US could not stay out of the war for much longer.

After the Japanese attack of 1941 Germany declared war on the US.

Mr Wear’s take on US policy and planning. Let’s see what Mr Wear has to say.

“Hitler’s desire to stay out of war with the United States was made more difficult on December 4, 1941,”

Actually, the US was never really considered a threat by Hitler. He considered her weak and too embroiled in her own domestic problems during the 1930s.

“Chesly Manly, the Tribune’sWashington correspondent, revealed in his report what Roosevelt had repeatedly denied: that Roosevelt was planning to lead the United States into war against Germany. The source of Manly’s information was no less than a verbatim copy of Rainbow Five, the top-secret war plan drawn up at Roosevelt’s request by the joint board of the United States Army and Navy.”

US military advisers had been doing what all countries do: planning for all military eventualities. In 1938 and 1939 various contingency plans were created: the Rainbow Plans.

By late 1940 Germany was considered as the greatest threat to US security. As a result it was Rainbow 5 that was promoted by the US military and agreed to by Roosevelt.

“On December 9, 1941, Roosevelt made a radio address to the nation that is seldom mentioned in the history books.”

That would be an address to the nation, the transcript of which can be easily found here:

“All of the above statements are obviously lies.”

The above lines were propaganda aimed at unifying the US population against Germany and Japan, both of whom, together with Italy, had promised mutual support in the case of any one of the countries went to war with the US. The Tripartite Pact was born.

“Hitler considered Roosevelt’s speech to be a de facto declaration of war. Since war with the United States was inevitable, Hitler felt he had no choice but to declare war on the United States.”

Hitler actually got what he wanted. He completely misjudged the US and its potential as an industrial/military giant. Hitler believed in fighting the Japanese the US would not be able to arm and supply Britain as well. How wrong he was. Declaring war on the US meant that Japan would have to stay in the war in accordance with the Tripartite agreement. Moreover, Hitler felt it important that HE should declare war and not wait for the Americans. This was an act of strength and was a sign that he still controlled events. There was never any OBLIGATION for him to declare war.

Of course, Hitler would give a different explanation to the German people; he was provoked by the US. Mr Wear seems to believe the same.

The whole situation is best summed up by Richard Overy in his book “The Road to War” where a more detailed account of this period can be found. See p 347 – 399,

“America’s withdrawal from world affairs mattered a great deal in the background to war in 1939. American neutrality and the evident strength of isolationism among the American public gave additional encouragement to Japan and Germany to embark on local programmes of expansion which Britain and France were too feeble to reverse on their own. Hitler convinced himself that America had declined in the 1940s because of social crisis and “degenerate” materialism, and that the balance of world affairs was swinging towards the Axis powers. This perception, false though it proved to be, contributed to Hitler’s decision to attack Poland, confident that the West would do nothing serious. The same misconception fuelled Japan’s growing determination to confront the United States in 1941″.