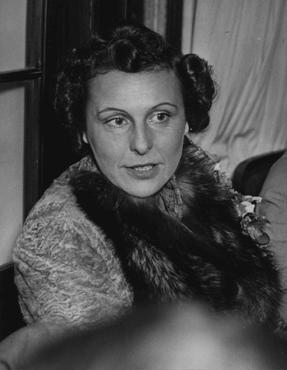 Not much to say about this lady as discussed in Mr Wear’s blog.. She was an acclaimed film director who made the mistake of siding with Adolf Hitler for whatever reason. To expect no fallout and recrimination after the war ended is a tad naive of the likes of Mr Wear and his gang of merry bloggers.

I have no issue with the bulk of Mr Wear’s post  except:

“Riefenstahl was telling the truth when she said she knew nothing about deaths in these German camps.”

I am sure she was. There is no reason why she should know the details of  mass gassings of European Jews. It was top secret. Just because Riefenstahl did not know about the extermination camps does not mean they did not exist.

“In fact, the Allies were being dishonest with Riefenstahl by not telling her that most of the deaths in these camps occurred from natural causes.”

Deaths from starvation and disease brought about by conditions induced by the Nazis in 1945 were not “deaths from natural causes” Mr Wear.

“The Allies used the gruesome pictures from the German camps to induce guilt in Riefenstahl and the rest of the German people.”

No doubt…as well as showing the German people what the National Socialists had been doing in their name; all part of the deNazification process.

“Riefenstahl was also criticized for still supporting Hitler after witnessing the massacre of approximately 30 Jewish civilians in Konskie, Poland. This incident occurred after Polish partisans in Konskie had killed and mutilated a German officer and four soldiers. Such anti-partisan incidents were common during the war and did not indicate a German plan of genocide against the Jews. Riefenstahl was not complicit in this anti-partisan action, and she promptly terminated her film reporting of the war after this incident.”

Except that the Poles murdered by the Germans were not Partisans. That is what upset Riefenstahl. Murdering innocent civilians as reprisals against Partisan actions was a war crime.

“Her reputation will be fully restored once people realize that Hitler had never wanted war and did not commit genocide against European Jewry.”

…and pigs will be seen flying over the skies of Texas.