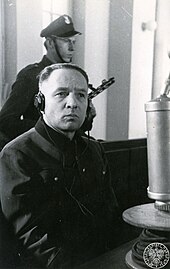 The treatment of Rudolf Hoess must be one of the oldest Holocaust Denial themes going. In a nutshell, Mr Wear believes here, that:

“His confessions were false. They had been extorted from Höss by torture,”

So what is the background to these accusations of torture?

At the end of the war, Hoess went into hiding. The British had Hoess on their list of important Nazis to capture and were hot on his heals. In order to find out his whereabouts the British interrogated his wife. She was told that if she did not say where her husband was, her children would be put on the train she could hear outside the window, and sent to the Russians. Frau Hoess gave in, told the British where her husband was and was subsequently released together with her children.

See pages 362-364, “Auschwitz, The Nazis and the Final Solution” Laurence Rees for a more thorough account of this incident and what followed.

The British rushed to a farm at Gottruepel where they found Hoess in the stables block. It was here that Hoess admitted who he was and what followed was a severe beating by the soldiers. These men obviously knew who he was and what he was responsible for. Hoess was then dragged to a car and taken to Field Security Headquarters at Heide. Here he was subject to sleep deprivation and beatings with his own riding crop. 3 days late Hoess signed an 8 page confession. From there he was taken to Minden and then to Nuremberg.

There are 2 allegations made by deniers.

Is a Holocaust denier.

“For the testimonies produced under Nuremberg “law” contained anything but historical truth. This is the conclusion which has been reached by all objective and unbiased observers of this judicial farce.”

“Objective” and “unbiased” observers who happen to be Holocaust Deniers.

“We have already expounded on the fact that Höss, after his capture, was subjected to the most inhumane treatment and at every stage of his imprisonment placed under various kinds of pressure

Staglich has expounded nothing. As we have seen, Hoess was treated badly by the British. The same cannot be said of the US investigators at Nuremberg. Moreover, whilst in Poland Hoess was treated well apart from being deprived of food by prisoner officials. This was quickly stopped by the public prosecutor’s office.

“In the Nuremberg trials, the basic rule was that a “fact of common knowledge” did not require proof. It was enough for the court to take “judicial notice” thereof.”

We are talking about 1945/46. Historical events were fresh in the mind. The indictments were quite clear of what the men were guilt of. The facts of the Holocaust were not on trial; indeed, the Holocaust made up very little of the trial. What the trial DID decide was culpability.

“…the judges in the Auschwitz Trial had to take “judicial notice” of it, in a certain sense, since otherwise they would have been subjected to the most grievous professional disadvantages and personal attacks.”