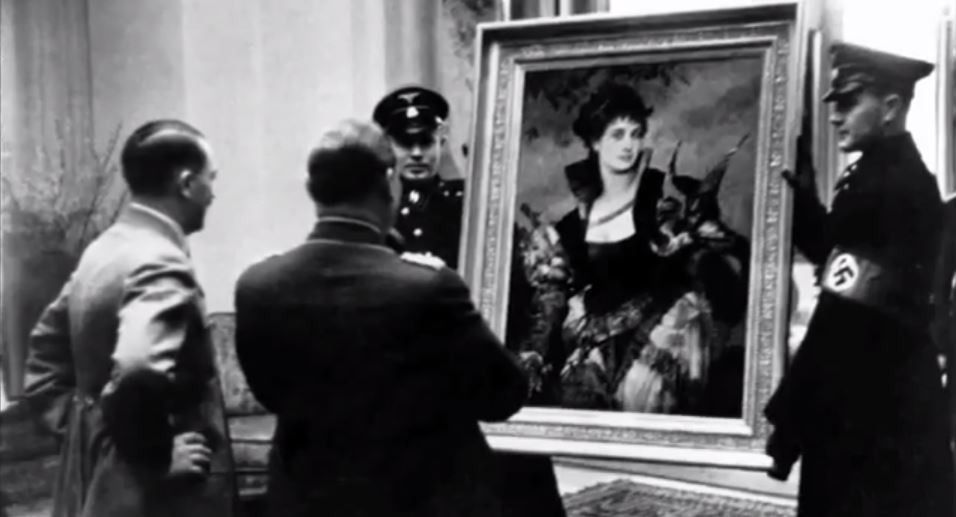 This little article brought a smile to my face.

“It is possible that President Truman believed these words when he spoke them. However, billions of dollars in gold, silver, currency, priceless paintings and art works were stolen from Germany and shipped to the United States.”

The problem for Mr wear was this was not Allied policy. Any looting was carried out at a local level by ordinary men on the front line taking advantage of the situation at hand.

Returning the Spoils of World War II, taken by Americans

The small scale looting by America soldiers was nothing compared to the mass looting of Europe by a Nazi controlled Germany. Germany took food, industrial equipment, treasures, valuables and people. All was authorised at the highest level. U.S. looting was not.

“More importantly, German patents and trademarks, completed drawings of German technological advances, and tons of secret documents were stolen by the Allies. Hundreds of German scientists were compelled to immigrate to the United States.”

Germany lost the war Mr Wear. That’s what happens when a country loses a war. Saying that, the men compelled to emigrate to the USA were treated very well and did not go through the privations most Europeans were going through in those first years after the war.

You don’t say Mr Wear. The Marshall Plan was influential in getting the whole of western Europe back on its feet. Did you expect the US to give all that aid for free?

“By one estimate the United States confiscated 10 times more German national wealth than the entire amount of Marshall Plan assistance.[3] Another writer estimates that the Americans took from Germany at least 20 times the amount the Germans received under the Marshall Plan”

I’m a bit suspicious of “estimates” by people like James Bacque! Here is a journalist who has real problems with numbers.

“Few Americans are aware that no peace treaty concluding World War II was ever signed between Germany and the Allies. The German government from the end of World War II until today has always been a vassal government of the United States.”

Technically speaking this is correct. Practically speaking it is simply not true. Just because a peace treaty was not signed does not mean that Germany is some sort of vassal government of the US.

“Tens of thousands of American soldiers are stationed in Germany not so much because of the strategic necessities of NATO, but because powerful interests want to make certain that Germany does not “go it alone.” American troops will stay in Germany for as long they are needed to maintain control of Germany.”

NATO commitments are exactly why the US has a token army still in Germany. Saying that, the last US tanks left Germany in 2013. US military bases have reduced from around 200 to just 36.

“Although Germany claims to be a democracy in which the will of the people counts, there is no realistic chance that a truly independent party could take power through the election process in Germany.”

I do think Mr Wear is referring to that “icon of democracy”, The Nationalsozialistische Deutsche Arbeiterpartei., commonly referred to as the Nazi Party. Mr Wear and his merry men seem to be big fans.

“The present German constitution imposed on Germany in 1949 by the victorious Allies ensures that a genuinely patriotic party having the true interests of the German people at heart will never come to power.”

“In occupied Germany non-violent Germans, even if they are Canadian citizens visiting Germany, are imprisoned for questioning the WWII narrative.”

No, Mr Wear. They are in prison for breaking THIS law:

Section 130 Agitation of the People

“(1) Whoever, in a manner that is capable of disturbing the public peace:

1. incites hatred against segments of the population or calls for violent or arbitrary measures against them; or

2. assaults the human dignity of others by insulting, maliciously maligning, or defaming segments of the population,

shall be punished with imprisonment from three months to five years.

1. with respect to writings (Section 11 subsection (3)), which incite hatred against segments of the population or a national, racial or religious group, or one characterized by its folk customs, which call for violent or arbitrary measures against them, or which assault the human dignity of others by insulting, maliciously maligning or defaming segments of the population or a previously indicated group:

b) publicly displays, posts, presents, or otherwise makes them accessible;

c) offers, gives or makes accessible to a person under eighteen years; or

(d) produces, obtains, supplies, stocks, offers, announces, commends, undertakes to import or export them, in order to use them or copies obtained from them within the meaning of numbers a through c or facilitate such use by another; or

2. disseminates a presentation of the content indicated in number 1 by radio,

shall be punished with imprisonment for not more than three years or a fine.

(3) Whoever publicly or in a meeting approves of, denies or renders harmless an act committed under the rule of National Socialism of the type indicated in Section 220a subsection (1), in a manner capable of disturbing the public peace shall be punished with imprisonment for not more than five years or a fine.

Section 130a Instructions for Crimes

(1) Whoever disseminates, publicly displays, posts, presents, or otherwise makes accessible a writing (Section 11 subsection (3)) which is capable of serving as instructions for an unlawful act named in Section 126 subsection (1), and is intended by its content to encourage or awaken the readiness of others to commit such an act, shall be punished with imprisonment for not more than three years or a fine.

1. disseminates, publicly displays, posts, presents, or otherwise makes accessible a writing (Section 11 subsection (3)) which is capable of serving as instructions for an unlawful act named in Section 126 subsection (1); or

2. gives instructions for an unlawful act named in Section 126 subsection (1), publicly or in a meeting, in order to encourage or awaken the readiness of others to commit such an act,

shall be similarly punished.

7 thoughts on “Historical JOKE Of The Month.”